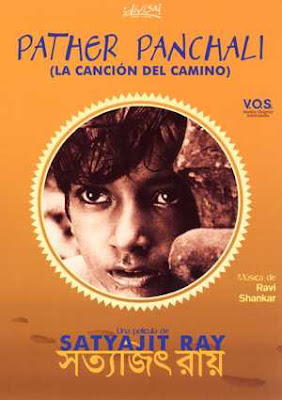 In the spirit of trying something different to see how it goes, this post begins a semi-recurring column titled "IU Cinema Experiences," in which I reflect on films that I've seen at the Indiana University Cinema here in Bloomington. Those already sick of the breathless coverage of the goings-on with my favorite local movie venue may roll their eyes on cue, but I'm taking this tack as a way to review older, classic films within the context of the overall experience with an audience in a theater. I thought of this after reporting last week on viewing Once Upon a Time in the West, one of the greatest moviegoing experiences in memory. (To my original summary of that masterwork I would add the idle thought of Stringer Bell from The Wire being a successor to Henry Fonda's Frank - a thug yearning for the white-collar respectability he's clearly not cut out for - and the fascination and pleasure in Leone's employment of intricate mechanics - of plot, of railroads, of industry - into his customarily warm-blooded filmmaking.) As one of my easterly readers noted, the revival of vintage film is par for the course in New York, but it's a game-changer here in the Midwest, and the fact that visiting VIPs from both Coasts have been taken by what they've seen here compels me to report on it as it's unfolding.

Yesterday afternoon's screening of Pather Panchali (1955) kicked off the Spring Semester's impressive "City Lights Series," following an overnight ice storm that left more empty seats than there likely would have been otherwise. I'd been looking forward to the movie because I'd seen a couple of Satyajit Ray films last year - after hearing about him long ago from glowing reviews by the likes of Roger Ebert and Pauline Kael - but his famous "Apu Trilogy" remains on Netflix curiously unavailable, so this was my chance to see the first of those films (indeed, the first film Ray made). Even sight unseen I had the idea that the movie was a coming-of-age tale about a boy's impoverished childhood while growing up in rural India. That's more or less true, leaning towards less, because Apu (Subir Bannerjee) is depicted as one part of a familial ensemble rather than the center of the story. The narrative begins - as is frequently seen through the eyes of - Apu's older sister Durga (a wonderfully assured Uma Das Gupta), whose petty larceny, it is implied, is part of the same gene pool as her cunning, opportunistic Auntie (Chunibala Devi). Yet significant parts of Pather Panchali are devoted to Apu's lonely mother (Karuna Bannerjee), who stays at home to care for the kids while their idealistic, playwright-aspiring father (Kanu Bannerjee) travels in search of work to make ends meet. The title of the film - the same as the original novel - means "Song of the Little Road," and Ray's movie casually unfolds as a string of vignettes from a folktale, held together by the calm, steady voice of a gifted orator.

Legend has it Ray had never shot a reel of film prior to the making of this one, and practically every scene in Pather Panchali - if not the meandering pace that connects them together - shows his instinctive movie-sense. One scene featuring Auntie telling a fable to her niece and nephew begins with a close-up of her shadow on the wall, slowly pulling back to reveal her gnarled face. (If I must confess to finding her character often irritating and hard to bear, I also have to admit that she's an unforgettable enough presence that the movie would be considerably less without her.) Another key sequence takes place during an evening monsoon, with Durga ill in bed, and her mother struggling to protect her against the wind and rain breaking through the rickety dwelling. Ray doesn't overdramatize the storm the way a Hollywood production would; it's very naturalness is what's terrifying. Yet his subtle visual touches - a door, a window tarp, a candle - are indicative of a master filmmaker.

Pather Panchali was the first film out of India to capture the attention of John Huston, Akira Kurosawa, and the world press at Cannes (and it's amusing how that sentence reads with authority despite my having only recently read about it). Also worth noting is Charles Burnett, during his visit to campus a couple months ago, said that it was Satyajit Ray - more than Italian neorealists like De Sica, so claimed by many critics - who was the primary influence on Killer of Sheep. (In retrospect, it's head-slappingly clear that Burnett's episodic debut about growing up in a poor African-American household shares many similarities to Ray's.) Of the three Ray films I've seen so far, Mahanagar (The Big City), a funny and bracing depiction of gender politics in 1960s Calcutta, remains my favorite; the third, The Music Room, while also a fine film, suffered from a shoddy DVD transfer and Hooked-On-Phonics subtitles. The 35mm print of Pather Panchali was imperfect, yet I suspect high-quality by what appears to be the dismal standards of Indian film preservation. More than Apu, who has every reason to feel dissatisfied, we should be thankful for what we have.
Posted by Craig at 3:00 PM

Cool. From Bloomington to you to me. I've vowed that this year one movie I have on hand from Netflix will be something somehow a bit out of my comfort zone, so hopefully this series will help me fill some blind spots.

Thanks, though some of the screenings are right down anybody's wheelhouse (e.g., Young Frankenstein, Seven Samurai). If I could recommend any film I've seen recently - on DVD or otherwise - it'd be Satyajit Ray's Mahanagar, which is truly wonderful. I also really liked Francesco Rosi's politically charged Sicilian docudrama Salvadore Giuliano, which indirectly fills in the blanks for much of The Godfather. And if you've never seen Kurosawa's stunning police procedural High and Low (which I got on Blu-Ray over Xmas), do so pronto.

This is surely one of the supreme masterpieces of world cinema, a defining entry into the school of humanism, the key work of this trilogy, and arguably Ray's greatest work (DAYS AND NIGHTS IN THE FOREST, THE MUSIC ROOM, CHARULATA and DEVI would be the others in the mix) It was Kurosawa himself who said of Ray:
"Not seeing the cinema of Ray would be like existing in a world without seeing the sun or the moon." There is really so much more to say about this cinematic landmark, but I think you hit upon the most vital aspect when you mention that Ray's cinematic sense manifested itself most compellingly in this maiden work. And yes I do absolutely buy that Ray's work was more influential with Charles Burnett's KILLER OF SHEEP than that of the Italian neo-realists.

Fabulous feature here! Best Wishes with the remainder of the schedule!

Sam, thanks very much for the well-wishes, and for giving a Satyajit Ray neophyte like myself some more titles to seek out. I just saw CHARULATA and thought it very fine.

I am 58 year old Indian in whose language(Bengali)the film Pather Panchali was made. It amazes me how the film can move young students, living in so different social and economic settings.In fact, it must be some innate human emotions depicted in the film which strike the universal human chord. I think if we understand those universal emotions our appreciation would be more fruitful.