Off the Field (Moneyball) 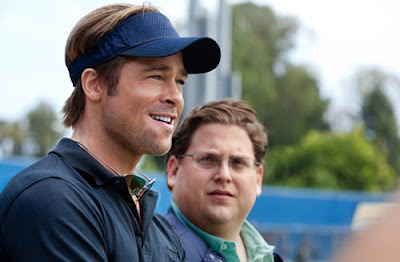 Several years ago, a member of the Oakland A's front-office revolutionized baseball by applying statistical analysis in game scenarios. But enough about Tony LaRussa. Moneyball, the new sports flick directed by Bennett Miller, stars Brad Pitt as Billy Beane, the A's general manager who, a decade after LaRussa's tenure, whisked away computer wiz Peter Brand (Jonah Hill) from the hapless Cleveland Indians and took the concept a step further: The Athletics hired players based on a combination of their underpaid salaries and overlooked potential -- bringing in three utility men, for example, to replace the departing high-priced free agent Jason Giambi. Brand's argument -- based on his computer algorithm -- is that you don't need stars to win, you just need runs; and you get runs, Brand explains, by getting players who can get on base.
Moneyball makes it clear from the start that, for Beane, necessity is the mother of invention. Losing to the Yankees in the playoffs, followed by the Giambi/Damon exodus during the offseason, opens his eyes to the reality that his team won't win by playing the same game of other teams with higher payrolls. Yet Pitt's performance hints at reserves of stubbornness and wounded pride. Flashbacks reveal that Billy Beane was once a promising baseball prospect himself, and rejected a scholarship at Stanford for a disappointing pro career. Steven Zaillian and Aaron Sorkin's script very cleverly makes Beane an underdog, no small feat for a character who is essentially a suit. Over the decades, sports movies have gone from athlete protagonists to coaches and now finally GMs; I'm not sure what it says about our era, but at some point, a film with an owner as hero seems inevitable.
Yet part of the problem I had with Moneyball is how it plays fast and loose with its own convictions in exchange for our sympathies. Early on, Brand claims (and Jonah Hill's softspokenness sells it) that his system, far from being impersonal, recognizes the value of players who aren't being given any. Then the movie goes on to suggest that managers, like the A's own Art Howe (Philip Seymour Hoffman), bring nothing to the table except their own egos and old school misconceptions on how the game should be played. The movie is grotesquely unfair to Howe, emphasizing that Beane used to be a player -- and is therefore different from standard front-office types -- yet careful not to mention that Howe used to play too. But even if you only focus on what's onscreen, Moneyball doesn't track. In his first scene, the Howe in the movie argues (persuasively) that he deserves a better contract for his accomplishments the previous season. Beane promises to look into it, and then other than a passing mention that Howe didn't get a new deal, the subject is dropped. We don't learn the reason behind Beane's decision, or whether he might have been unfair, because Zaillian and Sorkin's script is eager to paint Howe as the bad guy in the piece, and in their world being a bad guy is synonymous with being a bad manager. 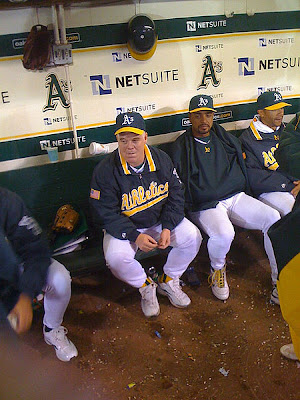 Or, worse, an irrelevant one. Moneyball has to have the first ever go-for-it sports-movie montage where the GM trains the players how to win. Howe is depicted as an obstacle in their path to success, refusing to start new first baseman Scott Hatteberg (a charming Chris Pratt from Parks & Recreation) until Beane trades away all of Howe's other options. But the most dubious scene is one where Howe is shown walking away from the locker room, where the A's, following another loss, are partying with loud music. (Well, really just one player: Jeremy Giambi, Jason's kid brother.) Beane enters the locker room and breaks up the celebration by yelling at everyone and throwing a baseball bat. No doubt some will wonder why Beane didn't hit an innocent person with that bat, and kill that individual, and how he has never seen a scene like that in a sports movie, and how a scene like that would be really interesting -- whereas I was merely left not buying the implication that the GM was doing the manager's job for him.
There are other problems at the script level. A key subplot involving Hatteberg's struggle to play first-base (having spent his career as a catcher) leads to a dead end; we never learn if he masters the position. And a scene where Howe, in a belated pique of good will, brings in Hatteberg to pinch-hit at a crucial moment, makes no sense: Isn't he a starter and already in the lineup? Arguably there are even bigger problems at the direction level, with Miller taking a story that should have a sunny disposition and screwball-comedy tempo and applying the same bleak gray color scheme and molasses pacing that he did with Capote. It's amazing that despite these things Moneyball remains moderately entertaining. Credit Pitt for continuing to come into his own as a movie star (and for a light touch that takes some of the heaviness off the inexplicably portentous music), and Hill, whom I have previously despised, for taking a page from his character's philosophy and discovering his potential within his own limited range. As a movie, with tough-to-dramatize material, Moneyball works reasonably well enough within the current Hollywood system. But it's no game-changer.
Posted by Craig at 8:40 PM

I'm not sure what it says about our era, but at some point, a film with an owner as hero seems inevitable.

I didn't see it, and it's a different "sport," but I believe you'll find what you're looking for in Secretariat.

Yeah, Howe's role in the film seems to be stacking the deck to help Beane be a hero.

I'm starting to wonder if the Zaillian/Sorkin partnership was a bad match? It's almost like this film has fragments of considered subplots that were discarded but never fully flushed from the system.

Exactly. The movie makes a big deal about Hatteberg finally becoming a starter, then turns him into a pinch-hitter for his big triumph? Sorkin got away with knowing squat about Facebook for "The Social Network" by making the movie about something else, but it's much harder to avoid the impression in "Moneyball" that the filmmakers have never been to a ballgame.

Ah, yes, "Secretariat": the horseracing movie where the horse has a walk-on. The book was better.

For me, ignorance was bliss on this movie. Objectively, I admire baseball, but I don't follow it. I had never heard of Beane and I didn't know the A's had a 20-game winning streak, and I couldn't tell if the film was unfair to Howe. I really enjoyed the movie, but I agree the Hollywood formula is part of its mix.

I see myself coming at it from a lack of inside knowledge, too. I have no idea if everything went down exactly as the movie (or the book) says it does; I'm suggesting that some of what I saw onscreen doesn't pass the smell test. If a movie makes a big deal about a player struggling to learn a position, for example (let's call it "Chekhov's Base"), it seems narratively logical to follow through on that premise by the end. "Moneyball" doesn't. Owen Gleiberman and scores of other critics conveniently ignore these problems so they can fall all over themselves in praise of the movie. I'm with them on Pitt's performance, and somewhat on Hill's, but not these other issues, despite Miller and Sorkin giving them the hard sell.

It's almost as if, with recession and unemployment squeezing everyone's economic opportunities, the fantasy-du-jour is the capitalist as clever underdog/outlaw. You see it to a certain extent in superhero franchises like Iron Man, and especially in snappy, fast-paced prestige pics like this & Social Network (both of which, not so coincidentally, were written by Sorkin who seems to want to do for businessmen what he tried to do for politicians in West Wing). Heck, it isn't just capitalist but anyone powerful & wealthy - look at the film that beat out Social Network for Best Picture.

It's almost like the film industry wants to "relate" to the public, but doesn't know how to, so instead adapts stories about rich powerful people who aren't like those other rich, powerful people. I never really thought about it until reading this review, but it's kind of weird isn't it?

Very well put, Joel. I had such a weird sensation watching this movie, made even weirder by the fact that nobody else seemed bothered by (much less noticing) the slick front-office guy being the hero and the blue-collar manager the baddie. It's like watching "The Natural" if Robert Prosky suddenly turned on all the lights in his office, rolled up his sleeves, and got down to the business of winning.

It is very similar to "The Social Network," only there Sorkin's agenda collided with Fincher's (a hunch confirmed by the special features on the DVD) and created a fascinating tension that Bennett Miller in "Moneyball" hasn't the chops to provide. I think you're onto something about it being a curious reflection of our era. Depression-Era movies often depicted the rich, but usually through a filter of satire. Here it's being played straight, a colossal joke that's not even funny.

My guess is it has to do with different artistic climates in the industry, based on history & the atmosphere creative types circulate in. In the 30s, writers were fresh out of the cynical hardboiled newsrooms, plus there was a major labor union movement going on in Hollywood at the time (with writers the biggest part). I don't know enough about the industry today to make anything other than speculatory observations, but I suspect that screenwriters tend to come more out of universities and glossier-type journalism or advertising, where they're encouraged to think not of a hardboiled, skeptical (if possibly sensationalist) "angle" but rather of cushy "human interest" that also pushes a product. That's probably putting me way out on a limb with saw on hand but those are my suspicions. Culturally, America today is all about sleek surfaces and chic "cool" and has been for the better part of a decade. Just as irony had a hard time dying after 9/11 like it was supposed to (instead it kind of doubled down) so this polished sheen isn't so easily shaken off even in the wake of 2008. It's as if memes have a life of their own.

This probably makes me sound like a Marxist, which is ironic as I get into arguments with people all the time about applying political-moralist judgements to art (I'm generally against) but a) I think this has aesthetic implications as well - it ties narratives into pretzels trying to deliver both the glamorous hero and the gritty underdog in the same character; and there's a phoniness that can infect the whole enterprise if the filmmakers aren't careful. And besides, even though I'm kind of critical of this trend, I enjoy some of the movies that result. But often they don't seem to have the same bite as something from the 30s, supposedly a "fantasist" decade.