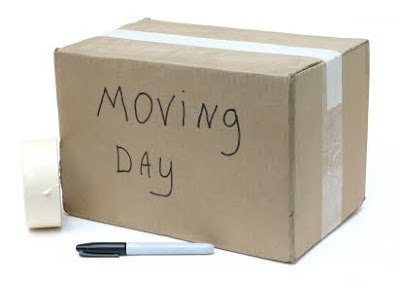 In a couple of days, I'll be uprooting from NE Ohio and moving out-of-state to a new home and a new job. I resigned from my previous place of employment a few weeks ago, which may explain why you've seen more posts from me than usual lately. It was a much needed break. (In the immortal words of Ron Livingston from Office Space: "I did nothing...and it was everything I dreamed it would be.") But I'm grateful to be returning to the ranks of the employed and am excited about the move (as generally stressful as moving can be).
The Man From Porlock, however, isn't going anywhere. I'll be on- and off-line for the remainder of the week; and once I start work my posting may be not quite as pervasive as it's been this summer. But I will be here, I will post, I will respond to comments. And I will continue reading the excellent blogs so many of you contribute. I've lost track of how many times I've read from so many of you a review of a film I've never seen or even heard about, then promptly went to the nearest theater, ordered it from Netflix or picked it up at the library. All of you have deeply enriched my moviegoing experience, so I need to scope out the cinemas near my new residence, give Netflix my change-of-address and get a new library card as soon as possible.
To hopefully return the favor, I highly recommend the great Winter's Bone (in theaters) and the very funny Smiley Face (on DVD). For stimulating film analysis, check out Paul Brunick's perceptive review of Salt, Stephen Altobello's hilarious and insightful series on the history of the Wilhelm Scream (at a blog new to me, Peel Slowly), and the outstanding video essay series by a few of our friends at The Museum of the Moving Image. Last but not least, don't miss this week's John Huston Blogathon, hosted by Adam Zanzie at Icebox Movies. I'll be in transit, followed by unpacking boxes and dealing with a high-maintenance cat, but will certainly check it out when I can. Keep the comments coming around these parts too, if you have any.
Posted by Craig at 1:15 PM

Congrats on the new gig! Do we get to learn which state you're moving to? You aren't taking your talents to South Beach, are you?

Ha, ha! No, and that's despite LeBron's generous encouragement on Twitter.

Both culturally and academically, I will be a Hoosier. Gorgeous campus. Looking forward to it.

Congratulations, Craig, and best of luck on your new environment!

Also want to add my congrats on the move and new job. Change is usually a good thing.

Thanks, Fernando and Steven. I've undergone several moves in my life where the result was total cultural shock, but I'm pretty familiar with the terrain in this instance. Plus, I've seen Breaking Away....

Hope you adapt easily to the new home and job, Craig! Speaking of Breaking Away, is this going to make you want to change your cat's name (to something Italian, perhaps)?

Ha! Well, he already has a Russian name. But speaking Italian myself might not be a bad idea. Or singing it. Play any guitar?

Congrats on the move... and best of luck. Always looking forward to your reviews. I'm taking that recommendation on Smiley Face, a movie I've always been curious to check out but just never got around to seeing.

Thanks much, Jeremy. I enjoy your reviews too, particularly the TV show reviews, though I've been short on time to comment of late. Curious what you'll think of "Smiley Face." I saw it a second time, and it was actually a lot less random that I originally thought. It's quite sneakily political, and the blessedly zonked Anna Faris holds it together.