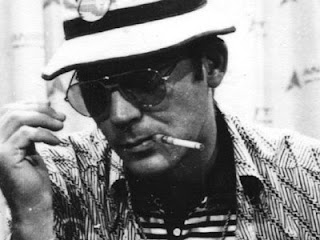 Movies about writers are tricky, and oddly enough it seems that the more visually expressive the author the more difficult the transition to the screen. Prior to Gonzo: The Life and Work of Dr. Hunter S. Thompson, there had been two major motion pictures about the good doctor. The first, Where the Buffalo Roam (1980), starred a young Bill Murray and was reviled by everyone, including Thompson himself, who with characteristic restraint threatened to disembowel the actor. The second, more recent, and more cinematically accomplished adaptation, Terry Gilliam's Fear and Loathing in Las Vegas (1998), received admiring reviews in some quarters and scathing ones in others, yet both the film and Johnny Depp's portrayal earned Thompson's seal of approval. Personally, I think Murray's performance is more interesting than Depp's, but what do I know? It's hard not to descend into cringeworthy caricature playing Hunter Thompson, considering he did it himself.

Gonzo, directed by documentarian of the moment Alex Gibney, does a commendable job fleshing out that caricature as well as charting the path to its subject's suicide in 2005. I had issues with Gibney's style in Enron: The Smartest Guys in the Room, where his attempts to goose the narrative -- such as a reenactment of a person's suicide -- undermined the power of his argument. Wisely Gibney restrains himself from dramatizing Thompson's day of reckoning. Moreover, he appears to have found the perfect subject to indulge his own flights of fancy.

The topics of Thompson's writing (well-documented in the movie) are deceptively straightforward: the Kentucky Derby; the Hell's Angels; running for sheriff of Aspen; a road trip to Vegas; a tour on a presidential campaign trail. Originality came from his surreal perspective, a downbeat, at times nihilistic pessimism conveyed via creative and energetic prose, and the at-the-time unorthodox methods by which Thompson inserted himself into his own narratives. Gonzo captures this volatile mixture, a Molotov cocktail that burned a hole through the pretenses of bikers, debutantes and politicians while concocting a somewhat pretentious persona simultaneously. Gibney captures an era when writers could make an impact on cultural discourse: just as Pauline Kael did it through film criticism, Hunter Thompson helped to shape (for good or, mostly, ill) the public perception of Nixon, McGovern, Humphrey, and the unfortunate Ed Muskie (the latter a victim of a false rumor of being addicted to Ibogaine, a rumor started by Thompson). Other targets, like Pat Buchanan -- one of the better interviews in the movie -- seem more amused, even fond of Thompson's antics.

To its credit, Gonzo is more about the work than it is the life. Some have objected to this, believing it glosses over the tragedy of Thompson: his raging ego; his creative burn-out; his outbursts of violence; his predilection for guns and drugs. But I don't think the film skates on the surface of those issues so much as pumps them into the bloodstream of the real story -- and a timely one at that -- the question of whether good writing still matters. 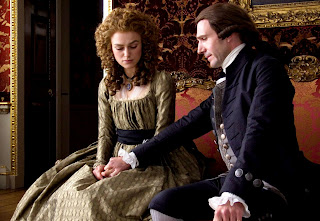 While I have come to loathe costume dramas even more than talking-animal movies, The Duchess had received enough acclaim to lead me to envision the positive review I'd hoped to write. I was going to wax rhapsodic yet again on the mysterious charms of Keira Knightley (never a great actress, but a vivid camera subject), praise Ralph Fiennes on his 2008 comeback (his turn as the profane yet weirdly principled mob leader in In Bruges my favorite performance from last year), and take a few more-or-less well-aimed potshots at all the tiresome Bronte/Austen repressed-Brit adaptations for which The Duchess was a corrective. Then the movie started. I gave up after thirty minutes, after the titular character had been subjected to an unhappy arranged marriage and forced to endure all sorts of drearily predictable unpleasantries from Fiennes's perpetually frowning nobleman. It was easy to guess the rest, with Knightley's lifeforce certain to be snuffed out. At least a talking chihuahua would have spiced things up.
Posted by Craig at 1:05 PM