Brawl in the Family 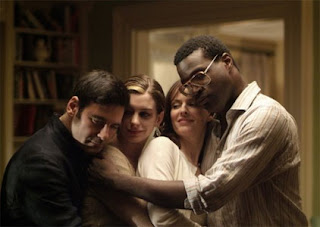 Is Armond White going soft? Years of fulmigating about liberal "hipsters," and now he's giving them the kid-gloves treatment: effusive praise for Oliver Stone's W., (a movie I may have overrated a tad myself); hosannas for Mike Leigh's socialist rib-tickler Happy-Go-Lucky; a generous toast to Jonathan Demme's multicultural Obama-fest Rachel Getting Married. Then again, Armond has always had a soft-spot for familial love, even when the family is as unconvincing as the one in Rachel.

Advertised as a cheery comedy, Rachel Getting Married is actually a dour hodgepodge of the worst tendencies of "independent filmmaking" that White's always railing on about. The screenplay by Jenny Lumet (daughter of Sidney) is her first, and it's filled with rookie mistakes: the enunciating of every emotion; the random acquaintance that the main character just happens to bump into who inadvertently spills the beans in front of the others; and, of course, The Tragedy From The Past that casts a pall over the proceedings. All shot by Demme with hand-held camerawork so jittery you half-expect Jason Bourne to crash the party. In the immeasurably lighter and more unassuming Four Weddings and a Funeral, Mike Newell was able to make the audience feel like a guest at the titular events without relying on cheap devices. It's time to give this visual style a rest.

Give Demme points, though, for earnestness, however brainless it may be at times. He depicts an integrated marriage between a Caucasian bride and an African-American groom without a lot of preachiness (though the white family is given all the dysfunctional character traits, while the black characters are reduced to the usual insulting role of dispensing virtuous pearls of wisdom). And Lumet has a nugget of a clever idea by making her protagonist, Kym (Anne Hathaway), an antihero who leaves drug rehab to wreak havoc on the two families who have congregated at her father's Connecticut estate for her sister's nuptials. There's something potentially invigorating in throwing a look-at-me narcissist into an event that is always the ultimate display of narcissism, and an early scene where Kym emotionally blackmails big sis Rachel (Rosemarie DeWitt) into letting her be maid-of-honor (her best friend had originally been offered the part) is effective enough that I wish Demme and Lumet had taken this conceit even further to explore just how far Kym will go to get what she wants.

But, alas, The Tragedy From The Past haunts her still, so that instead of exploiting the perpetual worrying of her father (Bill Irwin) to her advantage, Kym expresses annoyance that his doting is suffocating her. Nowhere to go dramatically there. Ditto her toast at the rehearsal dinner, which could have been wonderfully savage, degenerates into embarrassing psychobabble. Even the only purely entertaining scene, a contest involving a dishwasher, is given the killjoy treatment when The Tragedy rears its ugly head again, as if Demme decided to punish us for laughing.

Several critics infatuated with Rachel Getting Married have nitpicked the last act, when the musicians who have been teetering along the margins of the movie take center stage, but I enjoyed the respite from all the overheated melodrama. My misgivings take nothing away from the actors. DeWitt (whom I didn't recognize as Midge the beatnik from Mad Men) does her part to forge an exasperated yet loving sibling rivalry. Irwin conveys a sweet melancholy. As Kym's estranged mother, Debra Winger cuts through the bull with a mighty fist. And Hathaway gives it her all. It's a career-changing performance, perhaps akin to Jodie Foster's turn as Clarice Starling in The Silence of the Lambs. That film was preposterous too, but Demme had Anthony Hopkins -- his ace in the hole -- to challenge Clarice, toy with her, and finally grant her absolution. If the lambs won't stop screaming for Kym, it's because Demme and Lumet surround her with enablers (Winger's character excluded) rather than somebody who might force the girl to raise her game. What would Hannibal Lecter have made of her?
Posted by Craig at 1:11 PM