Candle in the Wind 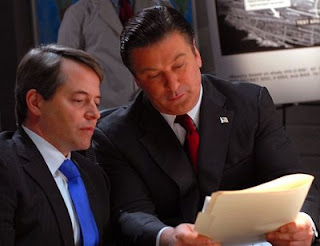 Has there ever been a show with a greater knack for names? Early last season on 30 Rock, we were introduced to who has become its best recurring character, Dr. Spaceman -- pronounced "Spuh-CHA-min" -- the serenely, breathtakingly incompetent NBC in-house physician who somehow remains Jack's go-to-guy in an emergency. (Last week, while examining a patient going into diabetic shock, he confused dialing 911 with 411 and asked for "Diabetes Repair.") Also last year, a terrific subplot centered on Jenna's major supporting role in an adaptation of a "Mark Grisham thriller" (John G's fictitious brother) called The Rural Juror. Then Thursday night, on this season's finale, we met Cooter Burger, the beleaguered head of Homeland Security in the waning months of the Bush Administration, who eventually explains that our nickname-loving President supplied him with both monikers -- 'Cooter' because he looks like a turtle, 'Burger' because he once saw him eat a hamburger. "It was a sandwich!" Cooter finally blurts out.

The hilarity of that line -- and the character's undignified name, which will keep me giggling over the summer -- is even funnier coming out of the plaintive exasperation of guest star Matthew Broderick, who built around the character a shell that steadily crumbled over the course of the episode. Broderick was also reunited with Alec Baldwin (co-stars of The Last Shot), whose Jack, in exile from NBC, took a new job with the Homelanders. At a time when TV shows are nervous nellies about coming across as even the least bit political, 30 Rock, led by its star and head writer Tina Fey, goes after hot-button topics with subversive gusto. (When Jack tells Fey's Liz that he's looking forward to joining "the War on the Poor," Liz tries correcting him: "You mean the 'War on Poverty?' After a pause, he replies, "Uh, yeah. Go with that.") A leaky ceiling in their office -- "No, it's not (leaking)," Cooter explains, "I'll show you the study" -- becomes a brilliant metaphor for the denial of the Administration at large. And Jack's scheme to get fired, aided by the clingy Cooter, involves the development of a "gay bomb" that was actually in the planning stage back in 1994, but is perhaps more topical now.

Meanwhile, back at NBC, Liz endured a pregnancy scare without Jack around for advice or support, however questionable or tenuous either may be at times. Some viewers, like Robert Bianco in USA Today, have complained that Liz, initially the stable center in a cast of zanies, has gotten too unhinged this season. (I'd offer a link to his review, but it appears to be broken.) I understand Bianco's concern -- and admire any good critic still writing in print -- as sitcom history teaches us that when shows start begin sacrificing character for laughs (e.g., the final seasons of Seinfeld and Cheers) they end up losing both. But I think he overlooks the last episode's more touching scenes: Jenna helping Kenneth with his "video essay," Jack listening to Liz's voicemail messages about her false pregnancy. And especially their climactic reunion, as played by Fey and Baldwin, which hit a melancholic nerve that hasn't been felt over most of this strike-abridged year.

Moreover, I'll be astonished if 30 Rock lasts longer than one more season, so best to go for broke while it can. Treading into controversial waters and thumbing one's nose at General Electric aren't the best ways to curry favor, but filtered through Fey's fearlessness, they can be funny as hell. "We bring good things to light!" Jack exclaims, trying to inspire Cooter into action, and he pulls up a lampshade only to find not a lightbulb but a lonely candle in its place. 30 Rock, a miraculous mix of buoyancy and cynicism, shines a light on our times even as it curses the darkness.
Posted by Craig at 12:37 PM