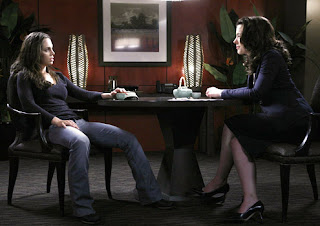 In Richard Bach's Final Cut, a book about the fall of United Artists following the disastrous release of Michael Cimino's Heaven's Gate, the author relays a tangential anecdote about screening an early cut for the same studio's Raging Bull. The head of UA was one of the handful in attendance, as was the film's director, Martin Scorsese; and when the picture ended, the mogul went up to the filmmaker, shook his hand and said with deep sincerity, "Mr. Scorsese, you are an artist."

I've thought of this -- the fine line between genius and folly -- the two or three times I've tried to endure Joss Whedon's new series Dollhouse. That I've been unable to sit through an episode in its entirety is because the show tilts unequivocally toward the latter. It's a mess. Part of the blame has rightly been attributed to the casting of Eliza Dushku, a fan-favorite as Faith from Whedon's Buffy the Vampire Slayer and Angel. Truth be told I often found Dushku's heavy-handed shitkicking tedious even as a supporting player or special guest star. (She's similar to Michelle Rodriguez -- formerly on Lost -- in this regard.) Here, in the lead part of Echo -- an enigmatic "Active" who works and lives at a shadowy high-tech organization that hires her out (and other girls) to wealthy clients for a variety of tasks, only to erase her memory when the mission is over -- she is jarringly miscast, a one-trick pony trying to be a chameleon.

Yet more than equal blame goes to Whedon, and not just for casting problems. Thematically, Dollhouse continues the exploration of his obsessions, namely the struggle of female identity in a male-dominated culture. Yet while Buffy Summers began as merely an unformed teenager, Echo is a blank slate perpetually wiped. That's a difficult foundation on which to build, and not even "the dishiest lineup of brunettes" currently on TV (Amy Acker, Olivia Williams, et al.) can disguise the painful fact that Whedon's usual strengths -- plot-development, nuanced characterizations, visual motifs -- are getting smothered before they catch fire. Another quote comes to mind, to paraphrase Pauline Kael: It's the kind of screw-up only a talented filmmaker could make. 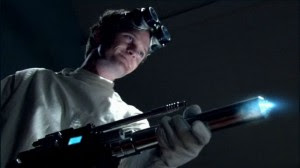 Not to fret, however; Whedon will bounce back in fine form, if last year's groundbreaking webseries Dr. Horrible's Sing-Along Blog is any indication. Watching it on i-Tunes, I thought Dr. Horrible was an enjoyable trifle. On the "big screen" (i.e., DVD, which I encourage you to see), it evolves into a mini-masterpiece, as well as a showcase for its stellar trio of performers (Neil Patrick Harris, Nathan Fillion, and Felicia Day). Whedon's instincts as an pop-entertainer really come together here, as does his unappreciated knack for emotional shorthand. At first I thought his expected climactic detour into pathos was a mistake, but now I see it as indicative of a recurring obsession that ranks with those of the great visionary film directors, one likely to play out in infinite variations for the remainder of his career. Mr. Whedon, you are an artist.
Posted by Craig at 2:46 PM

It *is* an uneven show. I've seen two episodes, but the first left me queasy and irritated at the obsession with young women being brainwashed by Them. There's some potential here, but it's potential in spite of the roadblocks the setup imposes.

Good to hear from you, Caius. I think we're in agreement on this one. Rumor has it the sixth episode -- this Friday's -- is supposed to be a game-changer. Of course that rumor was started by the show's creators, so take it for what you will. (Read: desperation.)

I've been waiting it out. Firefly didn't grab me until it was well along. Dollhouse has some inherent problems it may not be able to overcome, but I'm willing to give it a chance. I like Dushku a lot [I still mourn Tru Calling] but agree she has too limited a range for this type of part. But apart from that, there is simply no way to feel sympathetic with this company's mission. And the story lines have been terrible; that may be the worst fault of all.

>>And the story lines have been terrible; that may be the worst fault of all.<<

Yeah, the "Most Dangerous Game" one was the dregs. I am admittedly intrigued by Olivia Williams, as I often am; she brings more to the table than anyone else is bringing her.

Craig, you are breaking my heart. Yeah, Dollhouse has been uneven, but that's what happens when FOX starts monkeying around with a series. I've been reviewing BTVS Season One, and it was not without problems. With Whedonesque storytelling momentum has to be built up. I've been a Faith fan, and admit her range is a bit limited. However, this could be her chance to shine. I've been enjoying it so far, but am hesitant to judge completely until I see a full season.

Good to hear from you, Mary! You're right, Fox has already screwed up one previous Joss-created series, which makes me wonder what kind of masochist would go to the well for them again? We'll see if the Sixth Episode Spectacular is as amazing as advertised.