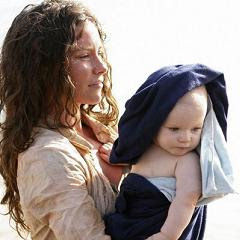 The season finales of Lost have always been a mixed bag, and often don't reflect the quality (or lack thereof) of the seasons leading up to them. After the superb, groundbreaking Season 1 on the island, the climactic discovery of the hatch felt like a letdown. The erratic Season 2 finished in a delirious if exhausting frenzy of activity: the meltdown of the hatch; the capture of Jack, Kate, et al by The Others; and the use of Desmond (then a largely unknown quantity) as the focal character for the two-hour arc, a risky gamble that paid off. Season 3 capped itself with the revelation that a few of the crash survivors got off the island, a mindblowing shocker that made up for a deservedly maligned year of narrative fits and starts.

Having learned their lesson, the writers of Season 4 built on the plot devices, storylines and renewed goodwill of viewers from the end of last year. With fewer episodes (already the plan even before the strike), Lost became streamlined, with less time for padding. And the newly incorporated flash-forwards featuring the "Oceanic Six" (Jack, Kate, Sayid, Hurley, Sun, Aaron) who would come to escape the island expanded on the show's universe, offering new themes and dimensions to the more sparingly used flashbacks, which had begun to run dry with (and reach desperately for) new information about the characters. The flashforwards also posed a potential problem for a show that has thrived on plot twists: Would the story hold our interest if we already know what's going to happen?

Season 4's finale, "There's No Place Like Home," made good on the promise of revealing how the six got off the island. At the close of the last episode, with the sextet divided into intriguing combinations, it wasn't entirely clear: Jack was with Frank and Sawyer at the helicopter; Hurley had tagged along with Locke and Ben near the Orchid; Sun and Aaron were on the ship rigged with explosives; Kate and Sayid had been rounded up in the jungle by The Others. Despite a couple of contrivances (why did The Others need Kate and Sayid to free Ben? why did Keamy think Ben would give a shit about the fate of the passengers on board the ship?), "There's No Place Like Home" deftly reshuffled the deck, putting the aforementioned six -- along with Frank and Desmond, and dropping Sawyer, who made a heroic, Spike-like sacrifice -- on the helicopter, narrowly avoiding the explosion on the ship. The journey to and from the boat was as fraught with tension as anything ever dramatized on the show. It was also a good showcase for Matthew Fox, never the most dexterous of actors but very effective at conveying Jack's monomania. Both Fox and the writers showed Jack's ambiguity as both a tragic hero and a sympathetic villain, doing anything to fulfill his goal of leaving the island, whether sacrificing Jin or listening to Locke (for once) and lying about what happened to them once they reach the mainland.

At their best, the flashbacks on Lost provided counterpoint to the events on the island. It was fascinating to see if a character could change his or her destiny or make the same damn mistakes over and over again. The flashforwards offer something more fatalistic though no less supenseful: the question becomes not what is going to happen, but how it happens. Earlier this season, we saw Ben arrive mysteriously in the Arab desert, wearing a winter parka. The finale showed how this came to be -- he went down into the frigid base of the Orchid station and pushed a giant mechanized lever that "moved" the island, though we don't know yet where. Lost is at its most involving in moments like these, when it doubles back on itself. I'm reminded of what Pauline Kael wrote about The Godfather Part II -- that it seems to expand in your head like a bullet.

"There's No Place Like Home" also demonstrated what separates this series from other classic jerk-you-around shows (Twin Peaks, The X-Files, ad nauseam), and that is the empathy it has for its characters. For all the excitement of the episode, the satisfying closures for certain characters (loved Michael's sacrifice on the ship) and the groundwork it paved for others, my favorite moment (recalling a scene earlier in the year with Sayid) was the joy on Kate and Jack's faces at the start of their helicopter ride, played in silence other than Michael Giachhino's dependably excellent score (he's the best TV series composer since Buffy's Christophe Beck). As the helicopter rises and the breeze hits their faces, we're reminded that this is the first time that they have been truly off the island since their arrival. Lost never forgets the human element, and in the best of those moments it soars.
Posted by Craig at 1:21 PM

Yea, I was very satisfied by this finale, and by the season as a whole (excepting, as usual, a handful of filler episodes). In terms of character payoffs, the reunion of Desmond and Penny was very moving and had me grinning, and Sun's reaction to Jin's (apparent) death was damn near heartbreaking. A lot of the suspense in this episode was how exactly the pieces would fall into place to get just those six, scattered all over the island, off together while everyone else stayed or died, and they did a good job of creating a sense of urgency even though we knew more or less where things were heading already.

In terms of what this sets up for next season, I'm really hoping that they continue to focus on the island, and Locke's new ascendancy as the leader of the Others, rather than putting too much emphasis on the Six's efforts to return. There's a potential to focus on new characters and tell new stories, particularly about the island's history, now that some of the most prominent cast members are off-island. Here's hoping for lots more of Richard and the Others. On the other hand, I think a season-long focus on the Six's return quest would get boring and over-extended really fast. But all in all I'd say this season has really upped my expectations for this show, and I hope it's able to live up to this.

Glad you liked it, Ed. And thanks for bringing up Desmond and Penny, a wonderful scene I neglected to mention. I'm already sort of dreading what bodes for these two -- dramatically, they're a canny choice to humanize or demonize Whitmore (or Widmore? I can never get his name straight).

I'm guessing the six will return to the island around the halfway point of next season, but I could be wrong. There are some interesting and difficult narrative logistics for the writers to navigate.